The junior home and away season is now complete for full field teams. Four out of our nine teams are now preparing for finals which is a great result. Three of those teams won the minor premiership so are well placed to bring home some silverware.

Junior finals will run for two weeks so there are no double chances on offer.

The under 16 shield boys came home with a wet sail and just missed out on playing finals by one point. They were one of the most in-form teams in the back half of the season. Great come back guys.

The inexperienced under 16 girls fought hard all year. They had a great win against TEM in round 13 and an unlucky draw against Footscray in round 14. The team and players individual skills improved greatly across the season.

The under 16 pennant boys finished on top of the ladder. They have lost only one game for the season. Coach James Newman has the boys firing at the right time of the year. They will
play fourth placed MCC in the semi this week.

Our under 16 district team battled covid, player shortages, no dedicated GK and many other issues throughout the season. Ever positive coach Som and the team soldiered on hard and
finished around mid-table. It was a great effort from all involved.

The under 14 shield boys had a dominant season which sees the team undefeated and on top of the ladder. They have hit over 100 goals and are a strong favourite to take the premiership shield. The boys will play fourth placed Doncaster in the semi this week.

The under 14 shield girls have also had an incredible home and away season. The girls dropped their first point last week with a frustrating draw against Footscray. They will be
looking to refocus and play fourth placed SUHC in the semi-final on Friday night.

Our under 14 district team included many new and near new hockey players. For much of the season they rotated the goal keeping duties too. The team performed admirably and
finished with three wins and a draw.

The under 12 shield girls have improved out of sight over the season. The team also grew to 16 players over the season which puts our girls club in a strong position moving forward.
The team finished 4 th  after the H&amp;A season and will face a tough semi-final opponent in Brunswick this Saturday.

The under 12 shield boys were also an inexperienced squad. Coaches Brayden and Stephen did a great job with the boys and they improved greatly throughout the season. The season highlight was a draw against Hawthorn in round 8.

Our half field teams still have two rounds to go in the season. They do not play finals. They have all performed very well and we have had some fantastic coaches working to improve their basic skills at training. Good luck for the final two rounds!

The junior committee are wrapped that we have completed a season this year! Wishing our four teams playing finals all the best. Please get out and support them if you can.

Our Premier League ladies took on Essendon Hockey Club in Round 1 of the 2022 finals series. The game didn’t go our way, but a top 4 finish means we have another crack at progressing through the finals this week as we take on Southern United.

After 2 years of no finals and little finals experience prior to COVID, we’re so proud of how our ladies played. The nerves are out of the way and now the focus is on a great win this
Saturday!
Saturday got us underway with a tight and tough contest for PL. Two goals to Nicholas Steffens wasn’t quite enough as they went down 2-3 to MCC. Huge game at the state
hockey centre next week in front of a huge navy blue Panther army.

The PD lads started HOT with the foot firmly pushed on the accelerator. Allen Guo found the back of the net inside 5 mins and the troops were up and running. A hatrick to Lashan Lanky
Haran put the guys in a great spot at 3/4 time. Allen came up with a second goal right at the death to  survive a scoreboard scare and run over TEM 5-3 to advance to the big dance in
two weeks.

PLR followed off well from PD. They opened the scoring through Jack Brennan who capitalised on some great forward play. TEM came hard and leveled the score. How ever big biceps Liam Daley was TOO BIG AND TOO STRONG to handle, scoring one and setting up another for Lachie Gerling to bring Waverley home 3-1. The boys now have a weekend off.

PE travelled out to Kew. They fought hard but went down and bowed out of the finals. Hat goes off to James Newman and the boys. Pen E absolutely stormed home in the second half of the regular season. Some big building blocks for their 2023 campaign.

You could tell it was finals time, with an unprecedented number of Waverley’s over 40As making themselves available for selection. Having faced Mentone just two weeks earlier in the penultimate round of the regular season, we faced them again for a place in the grand final. Waverley dominated the game front he outset. Possession and territory in our favour all evening. Although we lead 4-0 at halftime, with an early field goals and 3 corners, the second half proved to be a much tighter contest. Relatively comfortably, we ran out winners 4-1. A much welcomed week off as we wait for our Opponents for the grand final.
Last week the Panthers lost in a shoot out. After Waverley scored in the first 5 minutes, TEMS equalised and employed ruby tackle tactics to see out the game. The team will need to be clinical and get the job done this week.
Monday 7.00pm Box Hill. 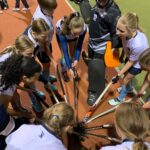 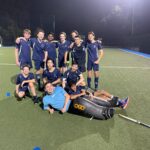 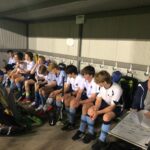