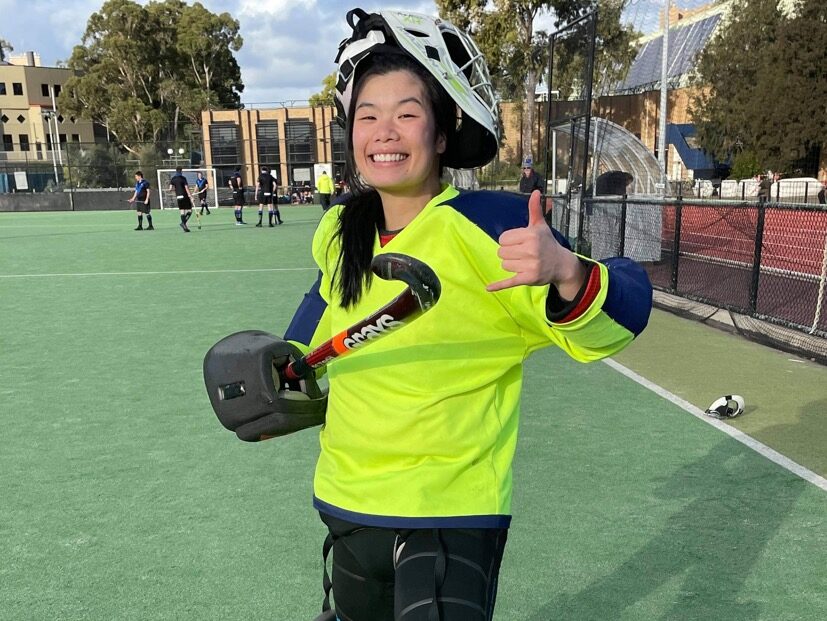 It was Bert Batch Cup round for our Premier League and Reserves teams at Camberwell and yet another important weekend of games for our senior teams. Read all about the weekends games below.

I had never seen so much orange in my life (not only their uniform).

The game had an intense start. Abbey had a cracking tomma which could’ve been a score if the goals were moved 2m to the right.

The game stopped for an extended period in the second quarter when a Camberwell player badly broke her collar bone in multiple places after breaking her fall and Camberwell scored not long after the game resumed.

As if one nickname wasn’t enough for George, self proclaimed “cake”, kicked her dump truck into gear and saved a goal on the line in the second quarter.

In the third, Dacia went straight from the bench to a free hit on the sideline where she then took on 11 players and scored a cracker goal. Bec described it as 3 passes which left everyone unsure if she was watching the right game.

Even thought it ended in a draw, the girls heads are still held high for the win next round against Altona.

With the vibes high coming from a big W the week before! And a few additional stars added to the line up! We showed up ready to play!

One of our most consistent games to date, every team member brining another level of intensity! Keeping the scores 0-0 up until the last quarter!

Unfortunately camberwell scored 2 quick goals in the last few minutes of the 4th quarter! It was a disappointing loss but was still a very competitive game! Keen to take this weeks intensity into next week!!

Pen E turned up to Melbourne uni Saturday afternoon with no expectations of the days game other than getting in a run (not too much as we had no subs) and a few hits against a youthful looking opposition. Erica stepped up into gaols, with her plan of attack to not touch the ball and for at least half the game she did just that.

We got a little excited with a few overzealous attacks on Melbourne’s goal. Naomi even decided to show off some cricket skills, complimented by all of Waverley and most of the opposition too. Hali entered the dee and Melbourne’s goalie did not stand a chance, she hit the ground and Hali was relentless until the ball hit the backboard.

We held them to 1-0 at which point Chris found herself on the bench injured 😢 (my pick for next weeks goalie). Somehow with 10 players on field we still maintained over 50% possession and a few more tries on their goal. Nice work ladies, now have a well deserved sleep in.

The boys arrived early to the game, nervous about the long 250m walk from the closest free parking zone. The energies in the group were high, led by Hackie who had looks that could kill with his Oakley wrap around white sunnies on and Dr Dre beats headphones not leaving his ears.

The game started and it was a tense battle between the two teams. The defence for both teams stood strong, not allowing any damaging attacking play and by the end of Q1 it was a stalemate at 0-0. Luke Hall had another all round excellent game in defence and has been Mr Consistent since round 1 this year, helped by midfield guru Lewis Matthews.

Q2 was much the same, both teams trying to break down the other teams midfield and defence but struggling to do so. By the end of Q2 it remained 0-0 following a fantastic James Shrimpton PC save at the end of the quarter.

Q3 saw both teams start to put pressure on, highlighted by a stellar all round play featuring Lewis, Remy and JK who was centimeters away from one of the goals of the year. Q3 continued and unfortunately Camberwell capitalised after a ball across goal found the stick of a Camberwell player.

Q4 continued and the game played like it had the previous quarters. Lachie Gerling had another fantastic game with his pressure up forward turning into countless turnovers, but unfortunately Waverley could not find the back of the net. Late into the 4th quarter saw a turnover in the backline which Camberwell scored.

The Waverley boys leave the ground disappointed knowing we have lost the Bert Batch Cup again this year but we know the best teams bounce back and we have bigger goals in mind….being the Premiership.

Tough night for the PLR boys, with a well drilled Camberwell side making the most of the chances they had. A big week on the track awaits the group, with a good chance to right the wrongs of last weekend.

The boys were coming in hot after our first win of the season in the previous round, and continued this form with an early corner and clean conversion from the main man Nige. We didn’t let up and kept the pressure on with some clinical ball movement through Dan (Harry Potter) Adams at centre half and used the width of the ground well to gain some high quality circle entries. Nige scored again from another corner and yours truly even moseyed on into the circle to dish off an exceptional assist to Ethan for a snag (no need for me to score til later on).

We got the score out to 4-0 before Mentone decided to come out to play. We managed to hold on through a tricky section of some good attacking play from Mentone and ran out the game well to maintain that elusive clean sheet. Great win from the boys to make it 2 on the trot. Probably should’ve converted a few more goals but all in all a very solid performance. There are rumours Azza fresh aired a toma but we won’t bring that up.

With a gap already starting to appear between the top half of the ladder and the bottom of Pen E, this looked to be your classic 6 point game up for grabs with second spot to be had for the winner.

And oh boy did both teams know it as very fiery 1st quarter ensued with very familiar faces being in the thick of it and some very questionable decisions being called . But in a typical cool calm and collective matter, it was us to strike the first blow with the Ethan putting away one with some serious heat thanks to a classic Glossop dump back.

At the first quarter break “old man jase” told us to play “our hockey” and to not get sucked in by the Essendon boys. We did and the momentum of the game started to tilt our  way with some exceptionally clean passes happening from Zane in the middle, the forwards looking extremely dangerous running angles, and our backs keeping some very dangerous Essendon forwards quiet. Also helps when you have an iron gate in goals with Mickey O back there..

With the onslaught of pressure it wasn’t too long until we had our second in the net thanks to a typical Lanky goal, hands and knees on the turf  with a classic deflection. At the half time break the scoreline sat at 2-0.

From there we continued to play the Waverley way, with accountability being a key factor, giving no Essendon player any reprieve throughout the game. In the end we held stead for a solid 2-0 win which could have been more with numerous missed opportunities up front. We won’t name names.

With some big names still missing and looking to come back in within the next few weeks, this win really sets us up for the year with the team now sitting second on the ladder only by percentage.

Our week started on a somewhat sour note with our regular match report representative Craig ‘Soreness’ Batten withdrawing from the game under suspicious circumstances.

In fairness, the trip to Bundoora was not for everyone, as Pennant G continued to build on our kilometres travelled for the 2021 season.

We started the match in classic ‘lower grade’ style by being hugely distracted by the ‘paddle ball’ sport being played on the oval next to the pitch, which ultimately led to a suboptimal warm up and a quick goal from RMIT. We are still not sure what the lads were playing but it looked like a cross between European handball, lacrosse and hockey.

Credit to the team for regaining focus and working the massive space we had on the pitch, effectively dominating our opposition from that point in the game. RMIT’s defence managed to keep us out on a number of occasions but we kept pressuring, eventually leading to Ben Lin scoring a fabulous goal to get us level with a quarter left to play. Shaun Davey and Tom Inglis had another solid game at back, supporting Mickey in keeping out their forwards from scoring again. This lifted our team as we pressed for the win. So Imamura and Andy Lee connected our forwards with our defence and play began to flow.

As much as we tried, we couldn’t get our noses in front and steal the game. The last play of the match was a short corner which we were close to converting but alas, it was not to be.

We’ll certainly take a lot away from this clash and need to make the most of the chances we are given. However, we also need to look at the fact we gained our first point for the season and are heading in the right direction as a team.

Special thanks to Nick Glossop (for his immense and at times, overbearing confidence) and Richard Steers (for his guidance on how Pennant E do hockey) for helping us out by filling in and shout out to Chris Castle (for coming to coach – but ending up as umpire).

Impacted by several players off with injuries , we put together a side with the help of several ring-ins from the midweek teams – thanks especially to Barry and Nick The game was tight with some great shots on goal from Raj , Brian and Cam H. The defence was always under pressure but with John in the backline and Nick M in goal , the TEM attacks were pushed back repeatedly