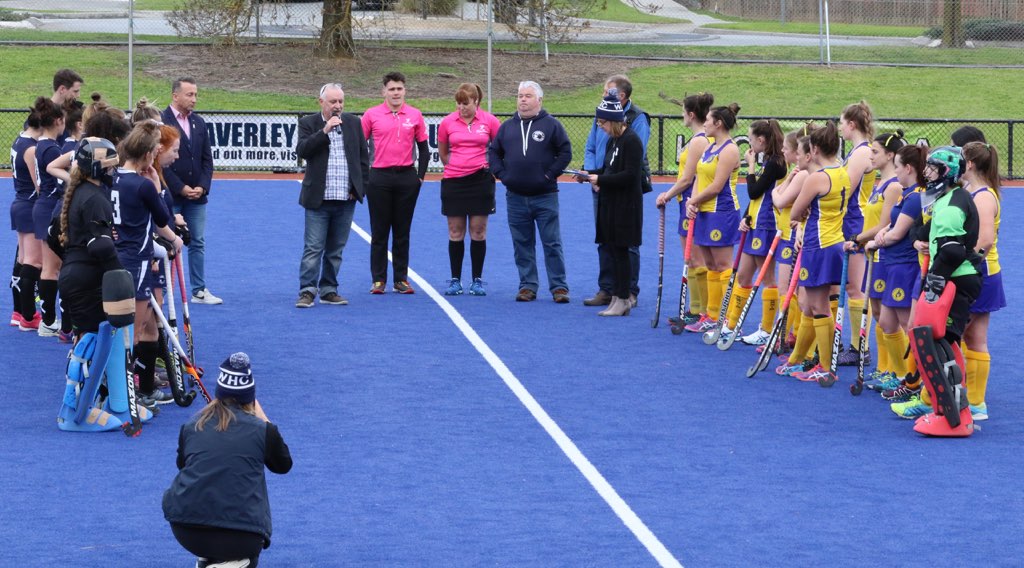 Hockey players, officials, fans, families and local government members gathered at Ashwood Reserve on Saturday 21 July to call for greater equity and respect between men and women in our community.

The Waverley Hockey Club initiative to host a White Ribbon Round also raised more than $2500 for resources to help prevent violence against women and girls.

In attendance on the day was City of Monash Mayor Paul Klisaris, Mount Waverley ward Councillors Brian Little and MT Pang Tsoi, and Labor member for Burwood Will Fowles.

Mayor Klisaris said: “There needs to be a cultural shift by promoting equality and respect between men and women, by creating equal opportunities. These messages support the creation of a future free from violence.

“It was fantastic to see the club step up to embrace this campaign and to take the lead in encouraging conversations and discussions around these issues.”

Lachlan Steinfort, Waverley Men’s Premier League player took the White Ribbon Oath on behalf of the team before the marquee match against Yarra Valley Hockey Club. He pledged to ‘stand up, speak out and act to prevent men’s violence against women’.

Steinfort’s team went on to achieve a convincing 4-0 win, while the Waverley Women’s Premier League side lost 3-1, conceding two goals in second half after being 1-1 at half time in a hotly contested match.

The club was also privileged to have White Ribbon Australia ambassador Tony Messenger deliver a powerful speech. It was a reminder that domestic violence takes the life of one Australian woman every week.

Murder is at the pointy end of a broad spectrum of violence against women. A spectrum that encompasses financial, verbal, emotional, psychological, physical and sexual abuse, as well as workplace harassment.

Roger Andrews, Waverley H.C. president, said: “We are proud to play an important role in hosting a campaign like this.

“It’s not only vital for our members and supporters to know this sort of behaviour is not okay, but that the club is a place where they – and men, women, boys and girls of the wider community – can seek help if it’s needed.”

Ms Hansen extended her gratitude to the local businesses and community members who generously contributed to the event, helping to make it such as success.

For more information WATCH THIS VIDEO.