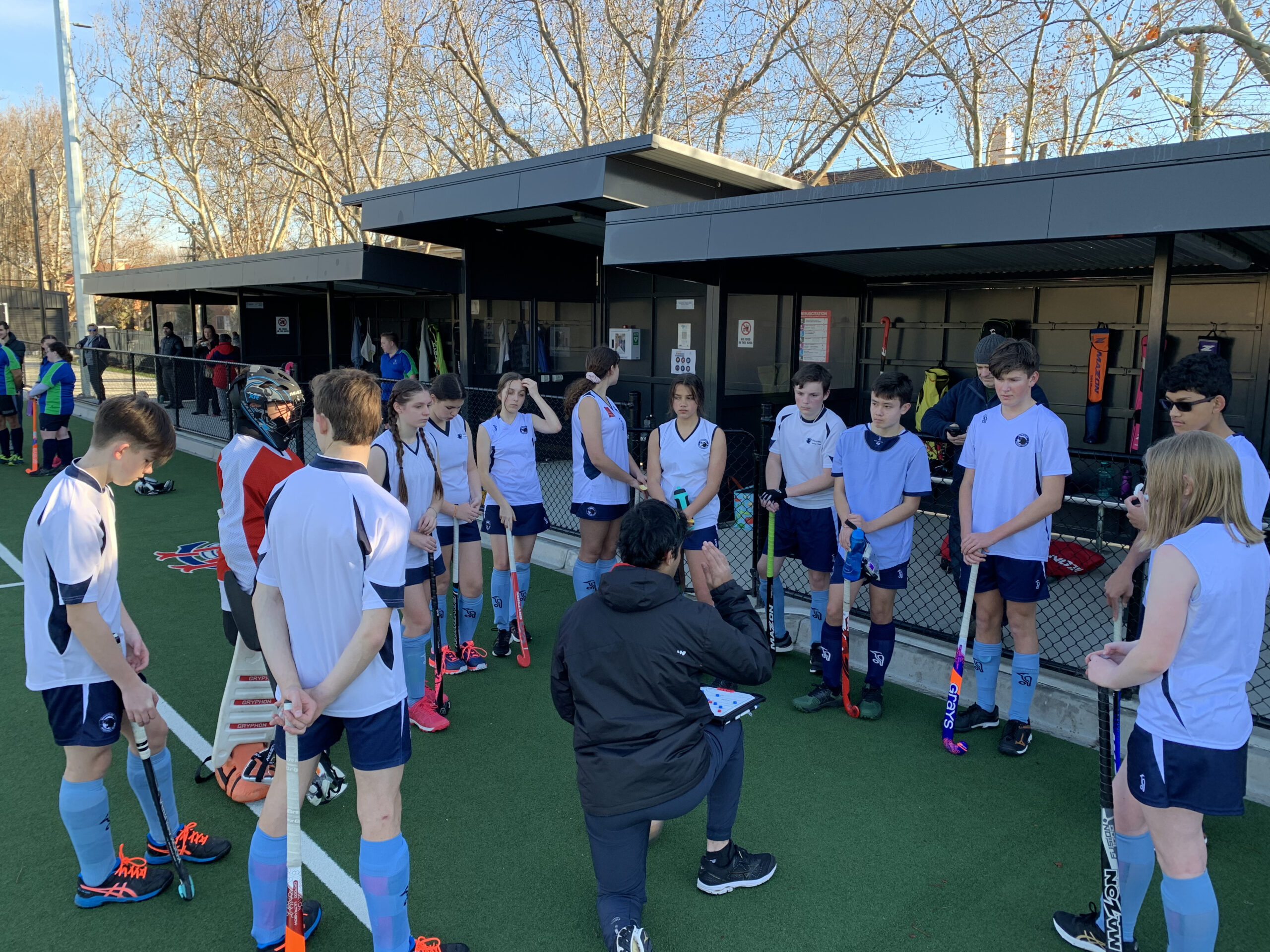 The winter chill set in this round but the Junior action was hot – read on for the full news and results from last weekend.

The Waverley Blues were looking to make it 2 on the trot as they took on the Casey Maroons at home on a beautiful Saturday morning. After slotting 9 goals last week, the boys seemed to still be in celebration mode as they were caught on the hop early with the Casey team finding the net early to put them ahead. Panic shot through the team with calls of “we’re gonna lose” happening only minutes into the game. But Rowan wasn’t having any of it as he completed a couple of nice solo efforts ending in a goal to level the ledger.

It was a tough battle against Casey with the majority of the match played in the midfield as both teams struggled to penetrate strong defences. The arm wrestle continued for most of the first half until ‘goal a game’ Noah made it 3 goals in 3 games to put the Panthers ahead as they went into the break. For the first time this season the half time lollies were all consumed which would prove to be the difference in the end.

The second half followed the same story as the first with Casey scoring with only 5 mins to go to lock the scores at 2-2. Then it happened…..the half time lollies kicked in and boys went berserk!!! Scoring 3 goals in 5 minutes they ran out strong winners 5-2 with Ryan scoring his first goals for the year and James and Max finding the next in back to back games. Great to see the continued improvement by the boys.

One more game and all the kids showed good enthusiasm. Our opponents had one less player, few of our team members played on their side and kept the “fair go” promise. Interestingly, one of our own members scored a goal for them. Eventually they were at 2 goals. On our side we scored the first few goals within 15mins. In this game our defence was a bit weak resulting in opponents scoring a few goals.

Eventually we scored a few more goals and towards the end we had 4 goals in total and opponents had 2. That made us the winner… 4th win in a row. We are holding on to our place in the ladder.
Under 12’s.

Knox put up a strong defensive game, particularly in the first half. After many goal attempts by Waverley, Aaliayah finally scored our first goal towards the end of the first half.

In the second half Aaliayah got us off to a good start with a quick 2nd goal. A few more attempts were followed including off 4 short corners before finally Jemma broke through with goal number 3. This was quickly followed by our 4th and final goal by Aaliayah towards the end of the match.

The Waverley team also put up a strong defence throughout the match, and Alex in particular was a stand-out in defence. This left Knox not able to get a single shot at goal for the match, and Grace as goalkeeper without a touch for the 2nd week running.

A cool but sunny Saturday morning saw the U12 Shield boys at home to an older and more experienced MCC team. The first half saw MCC dominate possession with the back line of Alex, Henry and Jack seeing off numerous challenges in the circle and Chay making several saves. Waverley’s attacking opportunities came down the right wing with Hamish running the ball for half the field on multiple occasions. MCC managed to scramble a goal after a penalty corner and take a 1-0 lead into the half time break.

The Waverley boys lifted at the start of second half and both teams had attacking opportunities that were foiled by strong defence. As the boys’ legs tired, MCC were able to capitalise with another goal after a couple of attackers slipped behind Waverley’s defences. While the Waverley hockey wasn’t quite up to the same level as a week earlier, the ultimate result was the same against a stronger team.

An early game at KBH began with our girls doing the vast majority of the attacking, however we really only had one or two shots on goal that looked like scoring. Penalty corner after penalty corner went begging as we really couldn’t get in sync even though the ball was camped in our attacking half. Charli continued her improvement with some great passages and Meg working super hard with and without the ball. The frustrating first half ended as it began with the score at nil all.

Giselle continued her great form in midfield constantly providing attacking opportunities and was giving the KBH defenders headaches. We finally got on the board with Asher scoring first for the 4th week in a row. From there the floodgates opened with Nikita scoring twice, Giselle getting a reward for her hard work with a goal and Jayana scoring her first for the club.

The final score of 5 nil was pleasing. Special mention to Zara on a great game.

After a draw last week, Waverley came in ready for a tough match. Ming Yao got off to a great start with a tomahawk goal. After half time Waverley kept the forward pressure up which resulted in a short corner and a goal from Connor. Waverley, hungry for another goal, found it in the form of a tap in from Chad. After Brunswick’s countless attempts at goal they finally broke our defence and tied the game for a 3-3 finish.

It was a great team effort from everybody all the way to the final whistle.

Waverley looked to be off to a flying start heading straight towards the opposition’s goal in the first minute, but no sooner did Greater Dandenong snatch back the ball, and the realisation hit that the game was on and it was gonna be a nail biter!

The tackling by Sandesh, Louis, Asher, Will, and Maithri was thrilling, and some great passing by Ethan, Kris, Jayden and Lachie was a treat to watch, but it was Waverley’s defence that won them the game in the end. Kaedan and Henry frequently thwarted Dandenong’s attacking play and Ryan having an outstanding game in goals successfully defending more than 8 penalty corners. Waverley were determined not to let any get past them, and they succeeded with a 2-0 final score to the Waverley.

The game was a very strong start, with two goals, TEMs beat us by one point just on the later section of the game. The opponents worked extremely hard to win and made our team work even harder and stronger than ever. We ran constantly up and down, which was draining, but worth the two goals we scored. Waverley worked as a team and everyone contributed as much as they could. Even when stressed at the umpires’ calls, overall the game was super on edge and exciting to see the outcome after all the hard work put into the game.

After looking slow for the first few games, our top juniors side finally found their stride. Essendon’s midfield is highly talented, carrying their side to be one of the best in the league. But our discipline and depth across all 12 players was unmatched. This led to us being able to press effectively and play cohesively as a side.

Essendon continued to ask questions until the end, not losing hope because the scoreline was never substantial. However we managed to control the pill and hold possession, toughing out a dog fight to walk away with the W.

Couldn’t mention any specific notable performances because every single player played their role and gave a max effort. But Our leaders – Dan, Smitty, and Oli – really set the bar and were vital in our win. Goals: Oli from a baseline flick and Howie with tomahawk (finally)

Coaches comments : “finally the teams giving us something to be excited about”
Spectators’ comments : “Really enjoyed watching, impressive standard of hockey for a juniors game”

It was a dark cold night at Hedley Hull, when we ventured out against Southern. We were out fast off the blocks, with a quick corner that failed but within minutes Lorenzo scored a goal. The ball was being passed around well, managing to get some attempts at goal. With a hit into the circle and Hamish on the post our second goal was scored. We finished the first half up by 1 with scores 2 – 1.

But with hard work in the first half and the second half was still to come. With an unlucky goal from Southern the scores were now 2 all. The boys were tired but kept running for the ball, and the third goal by us was scored with a run by Kai. The scores were 3 – 2 but there was still a lot of the second half to come. Southern locked the ball into our defence half letting them have shots at goals but we couldn’t get a pass out and into the goal. Eventually Southern scored their third goal making the scores 3 all. The game was up for either team to win.

With a few final attempts at goals from both teams neither of the teams scored resulting in a disappointing draw.

Thanks to all our fill ins. Hope for a better result next game!

As is often the case, it was dark when U16 Mixed District set out towards Elwood for this week’s game against Maccabi. What was unusual, however, was that the Sun rose en-route, and we had the pleasure of warming up on a clear and sunny morning… even if it was freezing cold!

Coach Som was once again at his affable best, encouraging and guiding the team against an opposition slightly low on numbers, but strengthened by seasoned players who appeared years more mature than their ages.

The first half started closely, with pressure building at each end as both teams set about playing patterns that would prevail for much of the game. Wavs were defending into a glaring Sun, which did not help their case greatly, but still held Macabi’s advances with skill and application. Goal keeper Ben was particularly brave under pressure – blocking multiple attacks before Maccabi eventually scored through a high bullet that lodged into the top corner of the goal.

At the other end, Maccabi’s defences were opened up by clever inside attacks and well directed balls from Hugo. Could we even the score? Not yet, and Maccabi successfully survived everything we could challenge them with and counter attacked relentlessly each occasion. Sean and Ella both executed critical saves at the last lines of defence, and Julia and Hayley were each particularly impressive guarding and even dispossessing the man dubbed “Rock Jnr” by those of us on the sidelines (well, me at least).

The attacks from Maccabi were relentless and the pressure Wavs found themselves under continued mount: Makayla pursuing tirelessly and clearing balls to the side and down the line and Will a critical foundation to our defence. Meanwhile, through the middle and into attack Hamish continued to push forward creatively, Chris was proving effective in creating opportunities and Cameron unleashed a deft strike that almost chalked up our first score. So close! At half time it was 4-0.

After half time the game continued to unfold along similar lines, albeit Wavs began to string together more effective attacking runs as our composure improved. First Kieron, and then Kaitlin, were both so nearly on the score board following ripping shots that would have challenged most professional goal keepers – but not to be. Our rivals continued to press and cause havoc, and before any one could spell ‘Maccabi’ the game was called with the score at 8-0, and we were all singing ‘Happy Birthday’ to Hayley and heading out for breakfast.