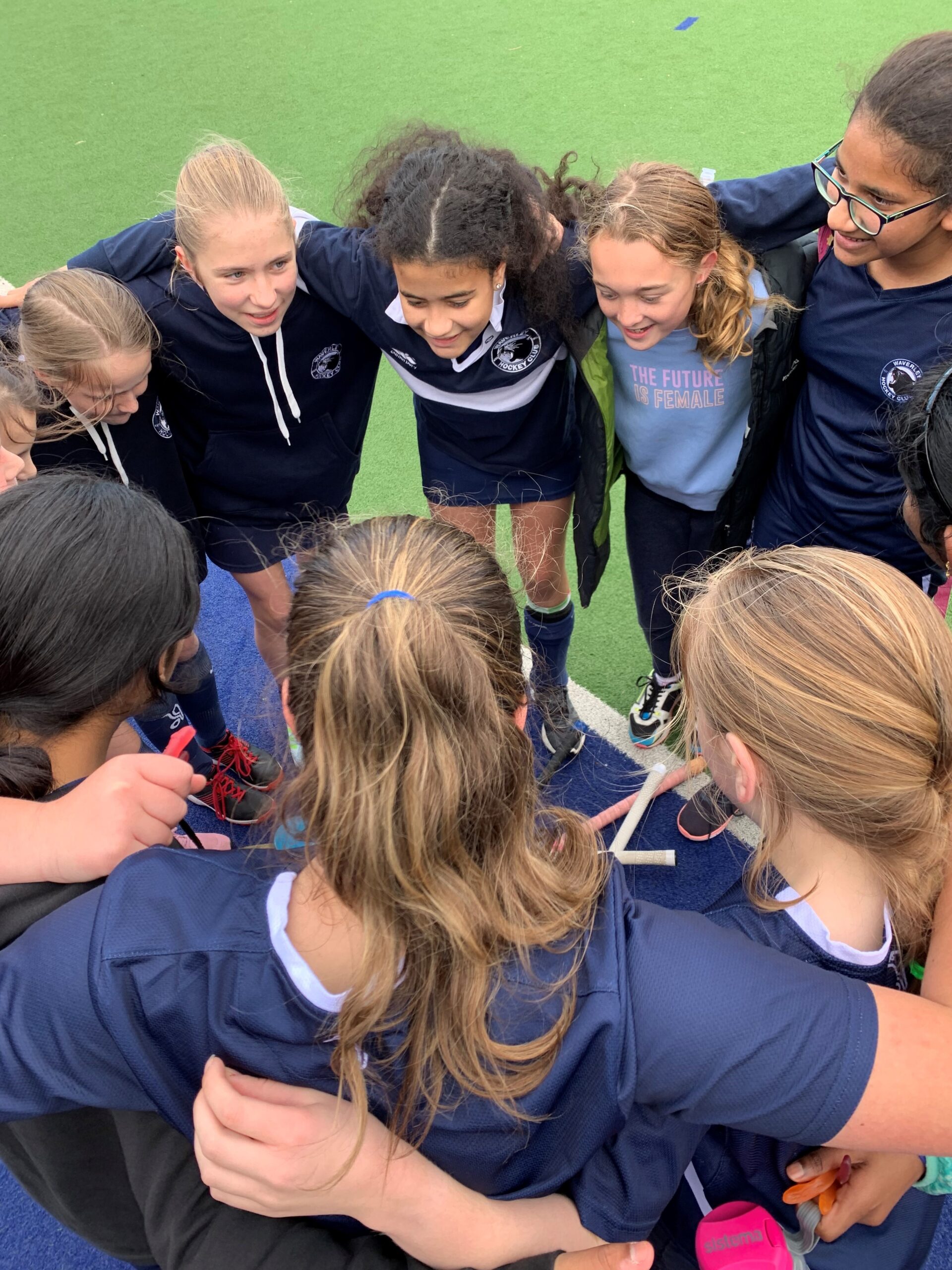 Some tough losses after the return from the latest lockdown for our Junior Panthers but some great stories 💙🤍!

It’s a chilly morning for the last game of the term2. Waverley girls are expecting to win their third game in a row to finish the season happily. They started the game very well to keep pressure on KBH girls, however a mistake made by us gave the chance for KBH to lead the game. Waverley star Zoe shined after that to have 2 goals in a row, however KBH scored at the last minute to lead the game 3:2 to finish the first half.

Waverley girls quickly equal the game by Emily at the start of the second game. They kept running up and down to tackle and defense without a substitute player, this burned out all of their energy and opened the door for Brumbies to score 3 goals in the last 10 minutes. Although the Waverly girls were very tired, they showed good sports spirit and didn’t give up to fight back. In the end, we lost the game at 3:6, but we saw big improvement in skills and teamwork in the last 3 games. We believe we will have better results in the coming season, go Waverly girls.

With a rematch against the team we first faced at the start of the year, the boys were on a mission to see how much they had improved. One thing we did notice was how much our boys had grown over the term, with a parent from SUHC saying “I thought you had new players because they’d changed so much.”

The boys took to the park and were faced with a barrage of attacks from the slick SUHC outfit. After defending for 3/4 of the first half the game was looking at being a blow with SUHC up 2 nil until Rowan put on the afterburners, stealing the ball in the mid field and saying “catch me if you can”! As he tore up the field and into the circle he left their defence for dead as he found the back of the net not once, but twice to level the scores going into the break!

At halftime coach Remy gave a few instructions to the boys asking them to man up and use the space around their defence. The second half started similar to the first with SUHC straight into attack and the boys on the back foot. Although they stood strong, it wasn’t enough to keep the opposition out as SUHC managed to score 3 more unanswered goals and run out winners 5-2.

With this match being our last for the season (until next term), it was pleasing to see just how far all the boys have come in such a little amount of time.

Unfortunately, we lost 4 – 1 with Max scoring our only goal.

The kids played well and had several shots on goal but every Maccabi switched the ball over from an attack, they scored a goal with no one defending the goals on our team.

Great day for hockey, starting off with both teams defending well with no score early until Jemma punched one thru to get the scoreboard started. The early passing and tackling all around the field had all players involved and the supporters in awe of the skills being shown. 2-0 score at halftime was an awesome effort for the girls and how hard they all worked to get through.

Second half was still tight defensively but SUHC started to tire from the relentless pressure of Waverley continuing to pepper at the goals and the defense stopping nearly everything coming their way just past the halfway line. Jemma and Aaliaya scored multiple times each, I am sure I counted 6-1 but the scoreboard was still showing 5-1. Only a very late goal from SUHC put them on the board.

Another successful result with the girls belting out the club song to be heard clearly over the planes flying by. WELL DONE TEAM!!!

After a disappointing game last week the girls were pretty keen to redeem themselves. A good week on the training track had us primed and ready to go on Friday night against Greensborough.

We had the vast majority of the play in our half and on our terms in the first half but rarely got a shot on goal so the mood at half time was one of frustration. Coach Thompson did his usual great job of pointing out areas for improvement and got his message across to the players in his usual, calm and deliberate way.

With renewed enthusiasm the girls took to the field with almost immediate results. Meg put herself in a great position for a tap in from a spillage in front of goals to score her second for the season. This seemed to fill the girls with confidence and the goals started to flow. Jayana scored in general play, Asher from a penalty corner and Chloe, who was having a great game, put one in the net with an absolute rocket.

A pleasing second half and a 4 nil result. Charli continues to learn and improve, Meena a great game and Emily her usual, reliable self down back

After last week’s big win this game was looking to be much tougher. The coaches however had a plan, win by at least 5:0 and the team would get pizza. With both Chad and Sunny sidelined with injuries it seemed an impossible task. Luckily Sandesh stepped in to help.

The first 5 minutes was tight with play going back and forwards between both teams. Then Waverley broke through with a great team goal. They followed that up with 7 more attempts at goals. The defence stood strong with only one goal sneaking through.

Round 6 was a challenging game, as we expected.

It started with the team meeting up in the dark car park, assuming we were at the right place (many phones and google maps were checked), with the anticipation of a hard game and rain. We were a few players down this week and we had the awesome fill-ins of Michael – coming across from Knox HC. Welcome, Grace and Alexis from the U12’s teams to give us an extra stick and extra pairs of feet for the game.

Casey came out ready to go and our players fought hard to keep defense up and get the ball into our D for scoring. The defense between both teams was strong and a lot of play happened in the middle of the pitch as opposed to the D’s. Michael scored our first goal in the first half with Sandesh getting our second goal in the second half of the game (after doubling up for the U14’s Shield team for the 1st half of their game)

Ryan had an awesome game keeping the majority of the goals out with our defence of Cameron and Kaedan coming to help. Whilst in the end we went down to Casey 5 – 2, our team played hard, well and were wet from the downpour in the second half.

Our Friday game was a bloody freezing one, but a very intense one. The girls played great and we had such a close game. Straight off Camberwell scored what was the only goal for the whole game and from then on we worked our butts off to get a score on the board.

We played an awesome second half and scores aside we 100% won that half. Some awesome saves from Charlotte and an overall fab game from the girls. Camberwell better be ready for our next match!!

A top two clash saw Waverley u16 shield take on Camberwell at Camberwell. As is typical when these two clubs meet, tensions were running high and both teams were very eager and competitive.

After dominating most of the possession and creating a number of attacking opportunities, subdued only by Anthony’s tremendous efforts in goal, Camberwell broke the deadlock, scoring whilst Waverley were playing with a man down.

The score remained at 1-0 leaving Waverley u16 Shield feeling down, yet eager for their next encounter with their orange rivals.

We had a slightly earlier game at our home ground in the typical icy cold and windy Melbourne weather! The MCC was a tough team to play against, with many of their players being Shield players.

The game started off with a lot of aggression from both teams and defence was essential throughout the entirety of the match. Tom had some of the best defence in the team and was impressive. The opposition were really good and dominant but we had Kai and Will who scored a goal each.

Despite Waverley having a defeat of 2 – 6 against MCC, the boys all gave their best and had fun in the process.

The match started with a bang. Camberwell put on their first goal in the first minute. Our team took a while to find their feet whilst the opposition was up and running and managed to score a few more towards half time. Ben, our goalie, was kept very busy. Our players started to find each mid way into the first half and the passing between our players lifted as we started to make inroads into the opposing defence. There were some promising runs towards the goal that had a lot of effort but no goal.

After the break, and a half-time sugar hit, the team came out firing and started to find each other more easily with the opposition having less of the ball. We had our first corner and looked more dangerous. The second half was far closer than the scoreline would suggest. With some more talking on the field, the signs for improvement look very promising.