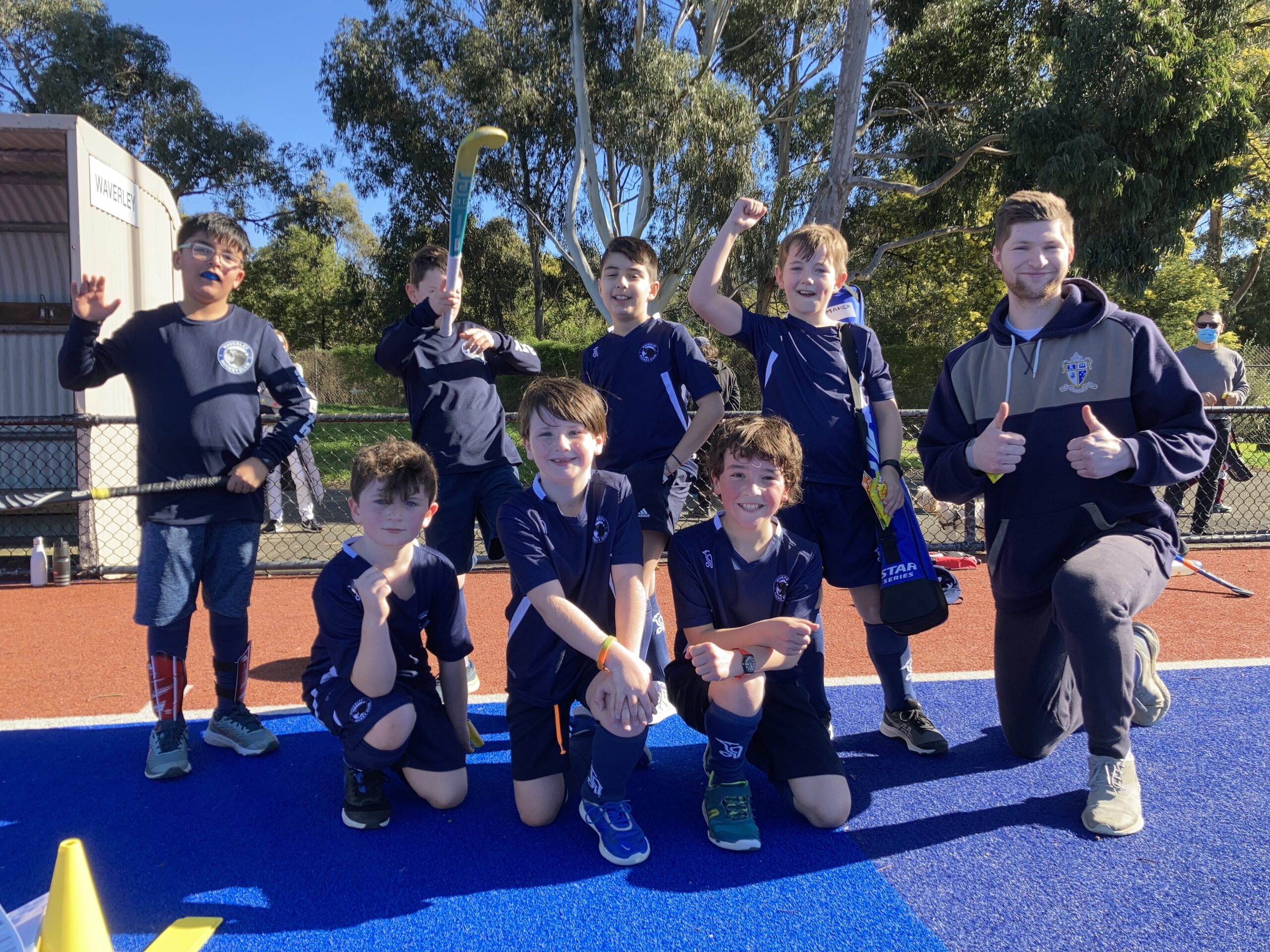 Some great Panther results returning to hockey after lockdown 5.0! Close to a clean sweep but most encouragingly our under 16 Girls Shield team celebrated their 1st win of the year and our under 16 mixed District team showed the massive progress they have made going down narrowly 0-1 to a Doncaster team that beat them 9-1 in round 3. 💙🤍

The under 10 girls were excited to be back out on the field playing again after a 5 week break. With the changes to fixtures and missed matches, we ended up playing Camberwell for the second time in 3 matches and improved on our previous results.

A strong first half with Waverley maintaining the majority of possession and goals to Zoe and Jade had us leading 2-0 at half time. Grace and Honey were also excellent in defence in the first half, controlling any forward push from Camberwell.

The start of the second half was a little more even, but Eliza, Akshaya and Alexis were able to continually intercept Camberwell in the midfield. Some strong work from the whole team in the last 5 minutes resulted in 2 more excellent goals from Grace to finish off the game at 4-0.

A great arm wrestle between our boys and Mentone Hockey Club was witnessed in our first game back after the loooooong break. Mentone started well, spending the majority of the first half in their attack with our defence tested. Thankfully the boys stood strong and weathered the storm and in the final minutes of the first half launched a counter attack which was brilliantly finished off by Rowan.

A few tweaks at half time were made by the coaches and the boys took to the pitch for the second half to put the plan into practice. The 2nd half turned out to be similar to the first, with an arm wrestle between the teams. Strong defences kept the scores at 1-0 until Deon managed to work himself into space at the top of the circle and fire home the sealer to see the boys take out the match 2-0.

It was a fantastic match…Our boys showed extraordinary defence tactics especially with a new member in the team. This kept the opponents at a bay. On the attack angle, everyone played their role very effectively. Good passing, positioning, and goal shoots. We were able to score 1st goal within 5th min from the start of the game, 2nd goal at 10th min. After the first half, our boys kept up the attack and scored another 3 goals at 40th, 50th and 53rd mins.

Even start. Brumbies attacked from the start but we came back intercepted pass. Long pass to Zara created an opportunity but no conversion. Strong attack but we defended well. Brumbies short corner but defended and cleared to the wing. Got a shot on but hit the post. 2nd chance and a goal by Jemma. Counter attack but we came back for a 2nd goal by Aaliayah. 2-0, the 1st half score

2nd half, the Brumbies goalkeeper started with a good save. Short corner soon after produced a 3rd goal by Aaliayah. Another strong attack just missed. Another shot on target saved by them. Good defending prevented another goal by us. They came back but again our defense was too good. Had an opportunity at goal again, created a long corner and then a final goal by Aaliyah to finish 4-0

Some early pleasing ball movement was not being rewarded with strong opposition repelling every forward advance. A stunning tomma from Doncaster set us back a bit and by the time we regrouped we were another couple down despite Chay pulling off some great saves.

Second half saw much better structure and possession hockey leading to some threatening circle penetrations. With the cobwebs well and truly blown out now, the team can look forward to consolidating their year’s learning with some very winnable games coming up to end the season.

It was great to get back out on the pitch after what felt like our 42nd lockdown …and the Waverley boys came out steaming , ready to get revenge over Mentone who stole a draw in the last minute of our last encounter.

We took off to a flying start and had lots of attack but found it hard to convert, until Connor finally broke through with a cracking goal. Unfortunately Mentone equalised not long after against the run of play , a corner.. we even accidentally had an extra defender without the umps noticing!

Sam Moore put in an unstoppable shot from a corner to regain the lead before half time, then after some inspirational words from the coaches during the break we fought out a tough second half, both teams adding one goal further and the old Navy blues holding onto a win and 3rd spot on the ladder. Great to have our illustrious captain Sunny back from injury to lead a solid defence. Well done lads!

Back into it after the lockdown break Waverley got off to a flying start with Sandesh scoring our first goal within the first minute. Waverley continued to attack and scored several more fairly quick goals, including one off a short corner, before some good defending from MCC slowed the Waverley attacks. After Will pushed in a shot set up by Ethan, MCC then went on the attack again but were defended well with a couple of blocks from Cameron and some good kick clearances from goalie Ryan. Waverley back on the attack resulted in an attempt that went into Ethan on post but was defended by the MCC goalie. Another couple of Waverley attacks running down the field gave us a couple more goals from Will and Jayden before the end of the first half.

The second half started with an attack from Sandesh being channelled out in the circle before Jayden goaled twice, one being passed in to him cleanly by Maithri. Several unsuccessful Waverley attempts followed, including a near miss from Henry, before the ball went up and down the pitch several times as both teams went on the attack. An unsuccessful Waverley attack short corner was followed by another penetration into the circle but the shot for goal was pushed wide by Jayden. He quickly followed this up with a successful goal, as did Sandesh. Some more time in the MCC circle followed but again they were unable to convert with some tight defence from Cam, Ethan and Ryan. Back on our attack Henry was unlucky with another unsuccessful goal attempt before a couple more successes from Sandesh and Will finished off the windy evening at Parkville.

The scoreline did not reflect the amount of attack and scoring opportunities MCC had but our Waverley team certainly was very happy with their success.

It was a cold windy night, and our first win for the season. The girls have been hoping for a win since the start of the season. After coming out of lockdown 5.0, the girls were even more determined to get a win.

Some fabulous goals were scored, and overall the team played a really great game. Well done:)

The hounds were very excited to be at the hockey centre for the first time this year. We enjoyed the faster and fancier pitch and it suited our fast game style accordingly. When we passed and stuck to our team based system, we dominated.

The first half we seemed quiet and slow, yet the kids still seemed to be having fun. Harrison played his first game on the wing (normally RH) and scored a hat trick in the first half! Not only this, but he was clearly doing the team thing and doing his best to get to good spots – this led to him getting the 3 awesome tap ins. Arriving at the wrong venue didn’t phase Evan at all, he kept his head so well – He got so many “nearlys” in the second half which is all we can ask of him, the bloke always gives 110% for the team. As always, Dan was very solid in the middle and Anthony was a ninja in goals. Was also very good to get our buddy Franklin (Oliver Thompson) back in the team after missing many games due to injury.

Our backline was able to outlet better than they ever have, perhaps because of the faster pitch, but they certainly looked like they were having fun. They did, however, look a bit slow and this proved us to be slightly vulnerable as Southern were able to get circle penetrations on fast breaks. We kept getting injured and cramping – this was probably on me as I may have forgotten to ensure they warm up enough, good thing for me to learn for next time.

Also think Wes played one of his better games yet, in the first half he noted that he was struggling with his touch on the ball after the covid break. But in the second half he was dangerous in the forward line and nearly broke the goals when he baseball hit the pill into the back of the net.

now we keep on building towards finals…
#watchthisspace

We played quite well compared to our previous games. we definitely made a lot more passes however we could have passed it around the back a bit more and made runs for the ball but overall we played well.

Having defeated us convincingly in round 3 (9-1), Doncaster probably came into this game thinking it would be an easy win for them again… Boy were they wrong! Although they got the win, by no means at all did we make it easy. Despite the lockdown and lack of training, our girls and boys settled right into the game early and came out firing. Inspired by the Hockeyroos and the Kookaburras, the players entertained the spectators with some stick tricks and some dangerous moves – we never saw the ball in the air as much as we did tonight.

The first half was equally matched with the ball making its way to both ends of the field and putting the defences to hard work. 25 mins into the half, we got our best chance of the game with a penalty corner. But despite our efforts, Doncaster’s defence was too strong, and we finished the half just as we started at 0-0.

The second half was just as exciting, fast and contested as the first. A few minutes into the second half, Doncaster drew the penalty corner, but our defence fended them off courageously. Moments later, it was our turn to take a shot at goal but very quickly it was back at our end again with our defence put to the test. Eventually, Doncaster was able to take the lead with an unfortunate, scrappy goal. With one goal down, we continued to put the pressure on and took the ball to Doncaster’s end and had multiple shots at goal, but we could not find a way through. Our last chance came with seconds left on the clock, but it was just shy of the goal. And with that, the final whistle blew and ended what was a magnificent game of hockey for our team. They put on an amazing effort and played their hearts out. They should be very proud of themselves. They put up a good fight and played their best game yet. A nice farewell gift to our goalie Ben who ventures on a 5 weeklong school camp.

If there was ever a reason to sing the victory song this season tonight, was it. Go panthers!!