By Travis BrooksNovember 24, 2016Uncategorized
No Comments 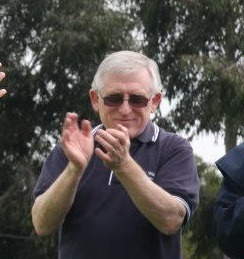 On Tuesday evening during the Annual General Meeting a motion was put forward for a new Life Member to be recognised, Alan Ballard.

Alan has played a significant role across all parts of the Waverley Hockey Club including juniors, mens, womens, veterans and the Executive Committee over 30+ years. During this time there has not been anyone who has had such a significant influence over the broad spectrum of members we have at Waverley. Alan has devoted many hours in each of the roles he has played and contributed to the lives of so many Waverley members.

Some of Alan’s involvement and achievements include:
– Team manager from under 13s to under 17s while his son Richard was in juniors
– Continued as team manager for a few years after that with the under 17As
– Started playing hockey at about age 45 in the veterans and then Men’s unit.
– Helped organise veterans teams for a good 20 years and continues to play
– Started a Metro 4 men’s team and ran it for a few years mentoring junior players and taking them to multiple premierships
– Coached a number of mixed and girls junior teams across a lot of years in under 10s, under 11s and under 12s to much success
– Coached senior girls team for 5 + years in the metro grades, again with success across multiple years taking teams to premierships
– Club Secretary on the Executive Committee for 9 years

This list above is by no means definite as to the volunteering and involvement Alan has had with the club. He’s a guy who has always put the club first and it was fantastic to see his efforts rewarded with the unanimous voting in of him as a Life Member of the Waverely Hockey Club with his son Richard and granddaughter present to witness the event.

On behalf of the Waverley Hockey Club, thank you Alan for all of your hardwork and the impact that you’ve made.