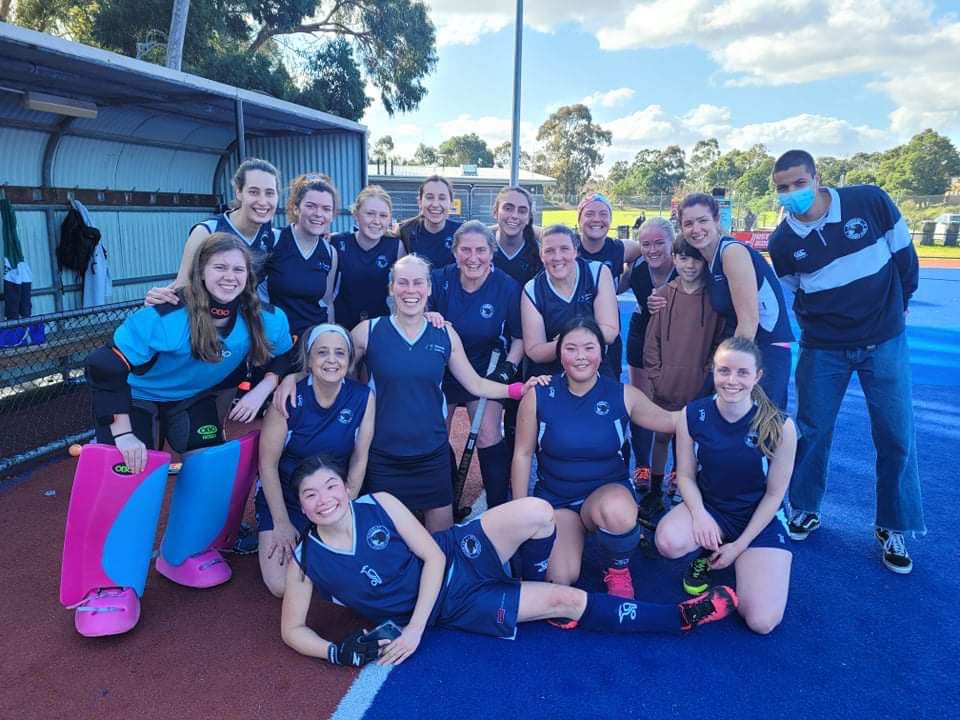 Winners are grinners 😃 with our Pen E women winning their top of the table clash!

Return to community sport ❤️❤️ after lockdown 5.0 but unfortunately many of our team scribes are still getting back into the routine with very few reports submitted for this weeks wrap.

The hockey gods decided to challenge us this week, scheduling a top of the table match for our return match! We welcomed back Chris after an 11 week recovery, and she returned like she never left. The rest of us felt a little rusty warming up thanks to 3 weeks off (no thanks to COVID) and we had to consider the sweat resistant sunscreen due to the lovely sunny day we were presented with.

Our first 5 mins was very strong, channeling our inner Olympic spirit. Hali capitulated our well practised deflections from training, and put the ball in the back of the net.

We defended the front half incredibly well in the second quarter and this continued in the 3rd quarter, where we were so close to scoring another goal. (I don’t think even TEMs knew how that ball didn’t get in the goal).

The forth quarter saw us tire a little, and play more in our back half, but we held off TEMs (even if they had a little help by a questionable short corner) to be the victor and steal top spot.

The boys were all smiles pre game, eager to rip into some hockey after the break. Nick Steffens opened his account for the year, by polishing off a horrible mistake in the back line by Footscray, they must of known he was on a duck.

The 2nd and 3rd quarters were evenly matched with a 2 goal lead to Waverley heading into the last qtr. Shelby gave us a rev up at the 3 quarter break as we were lacking the energy we usually have. Unfortunately Footscray scored 2 goals is the last 6 minutes to make the score 3-3 at full time. The boys will hit the park this week hungry to rectify our mistakes and put in good performance next weekend.

Excitement was high amongst the team – not only we’re we stoked to be returning to sport quickly after another lockdown, but round 10 had been circled in our calendars after narrowly [& bitterly] going down to Mentone in round 3! Only goal difference has separated these teams atop the Pennant E ladder and team chat was abuzz in the hours leading up to the game as we all watched the Olympic telecast of the Kookaburra’s of how we’d apply similar tactics to crush these try hard Panthers.

Nick ‘the Transformer’ Glossop was a late out as a COVID close contact and the jury is out as to how this impacted the final result 🤔 but much attention was focused on the make up of the teams. Would the competition top scorer and Mentone PL level player Yoshi Fujihara, who had been the main difference between the teams in round 3 play again [No]? Would our veterans Wes Moore and Drew Ashton be able to get through without another soft tissue injury?

The first quarter was an even and tight contest with both teams trying to retain possession, however both goal keepers thwarted all salvos. Waverley increased the intensity immediately after whistle blew to start the second quarter and created many scoring opportunities including a number of penalty corners but was unable to convert. In a very questionable call, Hugh ‘Vintage’ Rutledge was shown the cheese by the umpire leading into half time when his opponent stood on Vintage’s foot, tripped and fell. Then in what can only be described as a complete brain fart, Sam McPhillips laid a poor tackle + a shove over the sideline to earn yet another yellow card as the final seconds of the quarter drained.

Half time, Jase and Bomber planned and communicated exceptionally what was needed for the ~5 minutes of play after half time with only 9 players and it showed as we not only defended but won the ball and possessed until we returned to 11. Waverley piled on the pressure with a full complement and created another penalty corner opportunity. Time for the tried and tested Pen E corner variation with an 83% success rate, the Lanky dive. It didn’t fail, Lanky deflected the ball into the corner and the crowd erupted as Waverley went ahead 1-0. Our second goal followed within minutes via deflection from Wes at the top of the circle and you could see literally see Mentone’s spirits deflate.

We kept piling on the pressure and Mentone’s young keeper performed exceptionally, keeping numerous sharp attacking opportunities and shots on goal at bay. One he was not required for was the complete fresh air attempt from yours truly. Parked in the middle of the circle, open and in heaps of space, I had visions of a Tom Craig style, top corner bullet. Sturgo slipped me the ball and I could not believe the amount of time I had, time slowed, I saw the left hand goal corner, swung  and completely missed any contact with the ball, not even a smidgeon of contact.

Not to be left out of the action, young Harrison ‘Bath Boy’ Gerling [you should ask him how he got that nickname] picked up a 3rd quarter yellow. Wes put our third goal away to drive a nail into the Mentone coffin and the game finished 3-0 to irrefutably establish that HHF is the only real PANTHER LAND!

The result places Waverley clear at the top of the Pennant E competition table and also cemented Sam McPhillips position as the competitions leading card awardee!

Before I start the report, I want to firstly congratulate Ben L for the new addition to his family, we hope to see you back on the field soon. Secondly thank you to Erika, Emma and Di for their words of wisdom before our game “bring on the Aussie Olympic vibes and bring the win home”, congrats to all the ladies teams on their awesome results at home over the weekend.

Hitting the field after 2 wins and a draw in the games before ours we felt the pressure not the let the club down and we didn’t. We dominated the entire game expect for a 7-minute period at the start of the 3rd quarter. For a change I can honestly say Mickey had nothing to contribute in terms of saving goals this week as we kept RMIT very quiet up front. We conceded 1 short corner through a strange turn of events, Umpire A called a free our way, eagle eyed Umpire B called elbows from a good 150m away from the play (not so eagle eyed from 5 or 10 m away) which resulted in Umpire A changing his call to a short corner.

Once again we shared the goals around by scoring 2 goals in each half:

Goal 1 – Brandishing a new stick, glove and some impressive tape work on his knees – after some good build up play and tenacious running Shane scored our 1st. He did his level best to double his tally but the goal keepers friend (aka the post) worked against him.

Goal 2 – Well this man is on a hot streak of scoring, he scored in round 2 for the Open C and followed up with his 2nd of the season yesterday taking his goal tally to an impressive 3 over a 10 year plus hockey career. Yep our resident paramedic Dave is doing his best to move out of defence and into attack.

Goal 3 – After numerous attempts to score and a tomma in the car park (it was deflected to be fair) Malcolm finally found the back of the net with an awesome backfoot cover drive that would have looked at home on the MCG.

Goal 4 – Well this is proof that practise does eventually pay off, for the past few weeks the talk on game day has been how awesome Dordy has been looking at training – scoring at will. He belted and absolute screamer from the top of the D to score his 1st of the season.

Now onto Tom I, Umpire A mistakenly misread Tom’s commitment and enthusiasm to prevent an RMIT attack and decided that he needed to spend 5 minutes in the naughty corner.

Thanks to So for agreeing to help out at the last minute, next time we are playing before or after you ladies you need to bring you kit along just in case we need you.