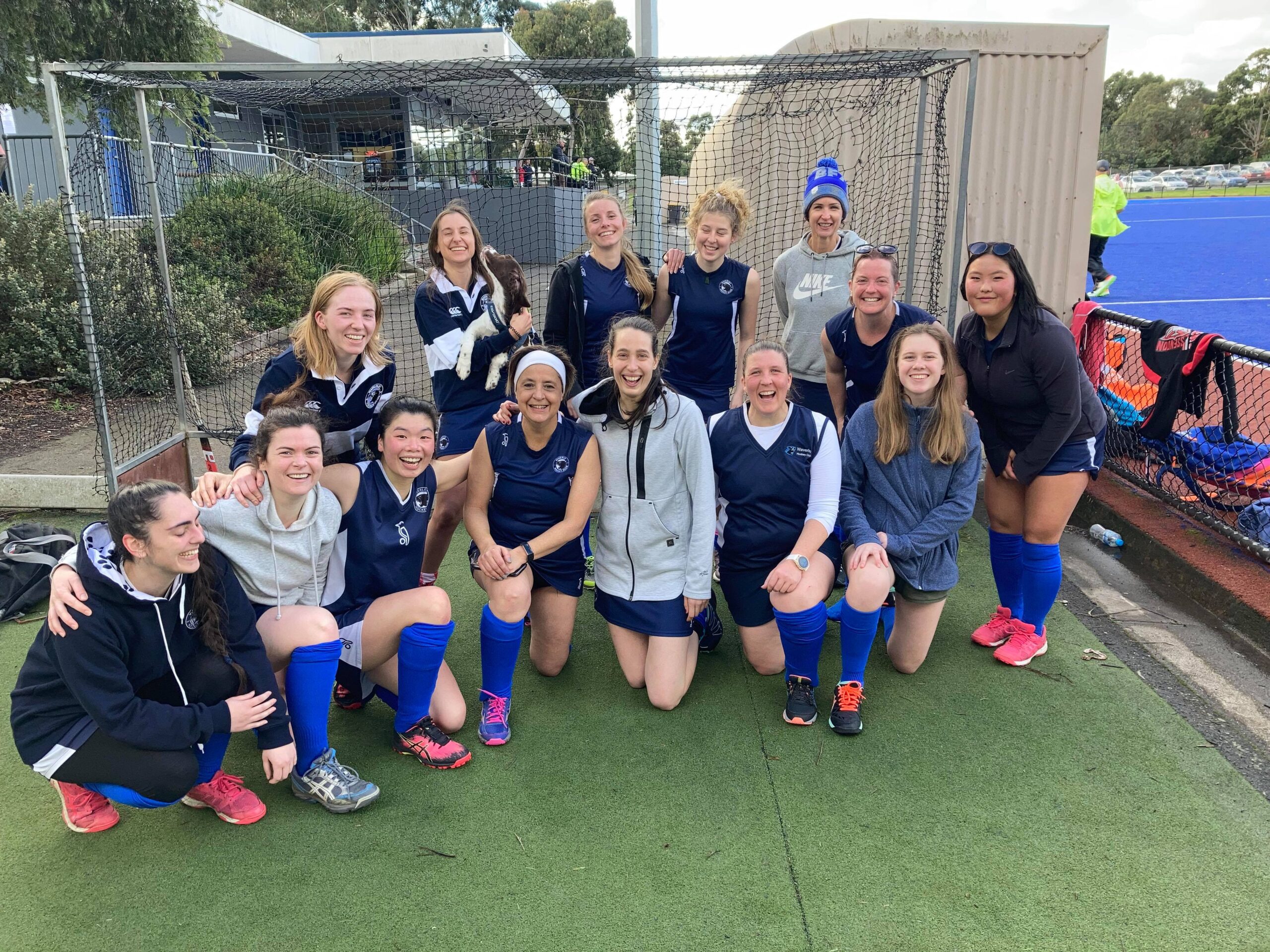 Our Women’s Pennant E team showing their support for Mens Health round ❤️.

On Saturday we trekked across the city to play Essendon. To say we knew it would be a hard game was an understatement. On paper they have the WPL premiership in the bag. I looked at our line up, Reels, Jemma, Evie, Zoe, Abbey, Bianca, Zizi all first year PL players and Jen on debut. That’s eight ladies playing their first year of PL in one team. The future looks bright for Waverley women.

Back to the game. We started fast earning the first PC of the game. The rest of the quarter was fairly even and we held them at 0-0, Reels was doing an amazing job in the net. The second quarter they scored 3 cracking goals, unfortunately one was right on the buzzer.

Half time we regrouped and Bec changed the game plan. We played better but they were too good scoring another 3 goals, including a PC after the siren. May have to work on that defenders!!! The last quarter we held them at 0-0 and we had a few good chances ourselves. Special mention to Ruby who has more courage than brains. But we love you and miss you on the field.

The girls never dropped their heads and Bec and I could not be more proud of this group. To the experienced group of Rach, Bec, Dacia, Brooke, Caley and Dutty we could not be more thankful for your leadership and encouragement of the next gen. We walk away knowing what it takes to be a top team, I’d say a big pre season of running to start. (Me included)

Thanks to another first year PL player Eliza who was our tech bench due to injury.

Away at the Essendon grounds, the team was roaring to go, ready for a challenge. Quickly, we proved to our opponents that we had been working hard, after a lovely pass round the back gave us a beauty of a go up field. Essendon’s fast pace was nothing but a minor concern as we soon began playing our style of game once more.

It was in the second quarter that our attacking penalty corner would have Essendon shaking in there boots. With Lauren and Maj on top, we were a force to be reckoned with. A straight shot by Lauren Head and SCORE!!! With a point on the board, the team were in high spirits and we fought hard against our opposing side for the remainder of the game.

The sun was a bit of an inconvenience on Sunday but we pushed through the heat and getting blinded every time we ran. Bec managed to score an amazing goal. We had a lot of possession but couldn’t manage to score any more. Although we lost, it was the best match we have played as a team. Everyone worked together perfectly. Safe to say the umpires were definitely not on our side but it didn’t stop our team spirit!!!

Jen made a comeback to hockey which we were all very grateful for. It was one of the most fun games this season. And to top it all off Meg made us all matching scrunchies!!

The hearty spice of Deep Heat filled the tent as Pen E kitted up for battle. Our ‘Men’s Health Round’ socks (long enough to be worn as tights) added an electric hue to our navy blues, and the promise of a victory snag shifted our minds into winning gear. A strong warm-up and ceremonious prayer to the hockey Gods (thanks Di) saw us slapping sticks in an enlightened salute – it was ‘on’ like an ecclesiastical Donkey Kong.

We dominated the goal third in Q1 with some sharp attacks and cunning weaves but the opposition’s ‘sans goalie’ approach resulted in fortress-like defensive play which we struggled to break. However, by Q2 our prayers were given the green light at the pearly gates, and Meg scored an impressive goal from a penalty stroke.

Q3 was peppered with close calls in our defensive circle, yet we managed to deflect all advances and run the ball up the line in the fourth with gazelle-like grace from Hallie to score the goal of the season into the top of the net.

Another great win on our home turf and another chance to play this brilliant game! Thank you to Nat and Meg for stepping in to support us; we couldn’t have done it without you.

A long drive out to Essendon saw 5th v 6th for a critical game in the season. The game started even with both sides having opportunities, but Essendon took first blood with a PC flick.

Lewie ran circles around the Essendon midfielders as the game picked up intensity. Nick was a magnet for the ball up forward until his calves wanted some attention and held the game up twice.

It was game on when Damo slotted one in the net at the start of the last quarter to make it 1-1. Tensions were running high in the last 15 minutes as the ball went end to end with both teams having chances.

The mighty panthers were denied a penalty stroke with 2 minutes to go after a questionable decision from the umpire. A fiery game finished at 1-1 but still leaves us in good stead at 4th place.

With Riley’s tasteful diluted cordial, the fellas were pumped for a particular rivalrous game, we hit on the first quarter looking like we owned the field with the Old but Gold Ant keeping the possession in our favour and Liam toying with them down the mid, making up for the absent of the usual suspects on the team. However, with some unfortunate bird chirps going their way, it led to us being down going into the second half.

Nevertheless, we went into the half resetting the score to 0-0 and heaved onwards, with Howie making some classy leads and perfect positioning. Dylan making sure Essendon’s defenders were on their toes not letting the pressure off them anytime and ‘First Game in 2 Years’ Cooper making sure the defence was solid.

Overall, it was the basics that failed us in that game and will be only looking forward to the next game.

After leaving us waiting at the front gates of the Knox School, our opponents started off strong in the first quarter by scoring the opening goal and showing us they were determined to notch their first win of the season on their very dodgy home turf.

After a quarter time spray of legendary proportions from stand-in coach Rich, Waverley played with intensity, accountability and fluidity of ball movement in the second quarter – scoring 6 goals in the quarter! The first was a trusty penalty corner drag flick from Rudy. With control of the ball, another penalty corner resulted and Rudy converted again with another drag flick. Great ball movement resulted in further goals from Bailey, Lanky and Glossop in the quarter.

After half time Knox had a couple fast break opportunities and some ‘inspired’ umpiring decisions, but Mickey O kept Knox at bay with characteristic big saves on the goal line.

The second half was a bit of a slog with surprisingly warm sun not helping endurance on the back of our three week break. We managed to score another goal before the final whistle finishing with the final scores of 7-1 against Knox.

Well our winning run came to an abrupt halt on a cool Saturday afternoon. After a lengthy injury lay off we welcomed back to Sturg unfortunately he failed to meet the criteria of at least a goal in the first game in the team, in fairness it hasn’t worked out for anyone so far.

Our opposition today – Craigeburn had some young fast and skillful players but besides this we kept them at bay for the 1st half of the game. We created a few opportunities of our own but their keeper made a few good saves.

The 2nd half of the game started much the same with us on the defensive, this did eventually lead to us conceding a goal. In fairness to our defence the striker’s footwork is something we associate more with Lionel Messi than in hockey. 2 further goals followed in the 2nd half with both of them being fairly decent deflections which left Mickey with little or no chance of saving them. Once again we cannot fault the commitment of the entire team.

Due to peer pressure I need to mention the 3D skills I used in the final quarter, skills like this should put Shelby, Brett & Tim on notice of the skill levels in the lower grades but talk of Tokyo is a bit premature !! In a nutshell I controlled a lifted ball about 1m off the ground – 3 bounces on the stick then followed by a short overhead to myself over the head of the opposition.

Quote of the day came from Richard Steers – Andy Lee takes the most amount of steps to go a very small distance.

Post games pizza’s and drinks went down really well and a good laugh was had by all.

With only 10.5 players (0.5 generous for Cid’s return from surgery), there was still no stopping this resilient Panthers line up. Up front, Corz executed his first of 2 in the opening minutes to silence the home crowd while bambi danced around the ol mentoneons to set up multiple opportunities. Despite Wolfs isolated fly-swatting attempt of a clearance (almost tearing both his intercostals and right oblique), the opposition’s only tactic of repetitive 75 yard back line tosses couldn’t penetrate the rock solid defensive Waverley unit.

It proved to be another Vic scout wasted trip, who purposely attended to watch Joffa get some touches before the national competition. Aside from Putzo’s pending MRI scans, Dally’s hearing test results will also be closely monitored during the fortnight.

Overall, Waverley’s stoic 5 nil victory (without some of their big names), will no doubt see further teams withdrawing from the Open competition.

In a top of the table clash – third plays second, Waverley played their most impressive team game of the season. Dwayne set the team up and from the sideline, managed the rotations and set plays. Every player brought their A game and this showed in absolute domination of Camberwell throughout the game – with the Waverley goalie not touching the ball once.

John Mowat again opened the scoring with a blinder from a short corner and Clint sealed the victory with a goal from the baseline. This really was a team win – strong offend, stronger defence, clear communication, good positioning and passing.

We now have a short break, before the second half of the season starts, with Waverley sitting second on the table