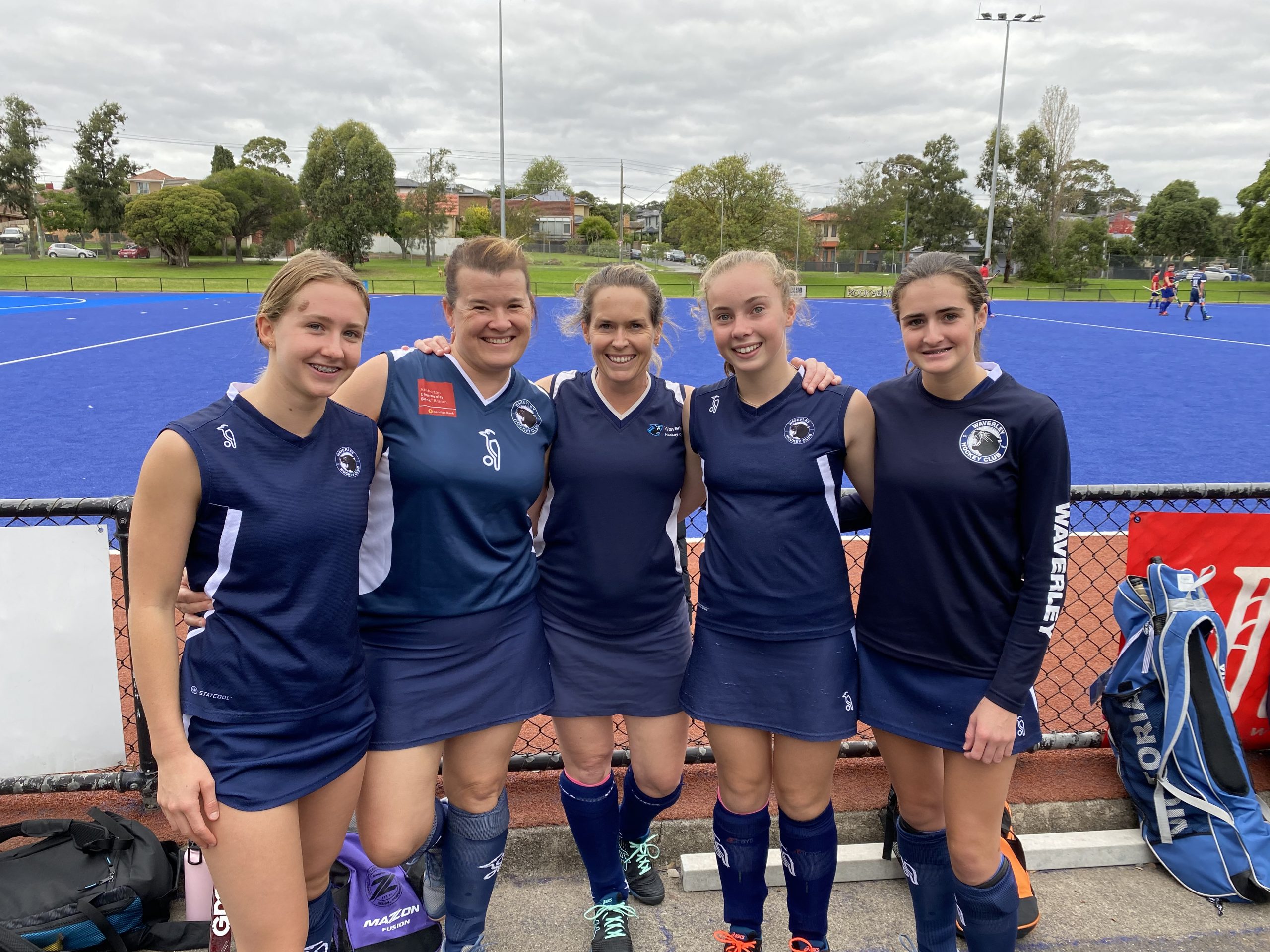 Our weekly wrap of results is back and below are the contributions from each team for round 1 – simply awesome to be back on the pitch competing for Premiership points after an 18 month layoff.

With the vibes set high coming into round one, Waverley’s women were hot to get on the field and show Yarra what two preseasons have in store, and boy did we deliver. Within the first two minutes Caley Mazie managed to snag a corner to get the ball rolling early, this assisted Evie stansby with finding the back of the net quite comfortably.

The run back to the centre was well celebrated but we didn’t stop there, with a quick turn over from Yarra we found ourselves up in the circle early and Caley pulling the trigger to set us up for a 2-0 lead within the first 5 mins. The second quarter saw Yarra converting from a corner leaving the score at 2-1, this didn’t phase us. With a scoreless third quarter and dominance from the panthers, we were coming into the final quarter eager to put Yarra to bed.

The beginning of the fourth, a lovely cross ball from the top of the 25 saw Caley on the end of the ball placing it in net more than easy, wavs now leading 3-1. With majority of the play in our attacking 25 we were hungry for another goal, with a cheeky attempt from Jess rake bolt coming very close, yours truly, found it on my back stick and that’s when we came to a very comfortable 4-1 lead.

What a great start to the season taking the three points leaving Yarra in our dust! Can not wait for a great year ahead and tackling birds next week.

It’s game day. It’s round 1. It’s the first game in 18 months due to the pescy Rona. There’s a sea of blue down to support the mighty women’s 2s. The team is fairly new but we take off to a good start, looking like we’ve played together many times before.

Yarra commit some daylight robbery for the first goal. We don’t let our heads drop, we fight it out. Dutty (aka me) scores her first goal (probs ever). We’re back on 1-1.

Blood, sweat, no tears but some huge corkies. Yarra step it up in the 4th and commit their second robbery of the day. It may have been a loss but the real win was in the teamwork and camaraderie displayed by the Panthz.

Well is sure has been a while since we hit that pitch.. in hindsight a few training sessions would have been a good idea. We hit the field strong with 5 Thompson’s in the line up, the 400m Australian champion, some young and upcoming superstars and some old superstars.

We took the lead early and played a strong game, opportunities presented and we practiced our corners unsuccessfully. Thanks Indi for getting back in the goals after 4 years out – we would have struggled without you. Hawthorn brought in their weapon on the corners and unfortunately we couldn’t answer back today. BUT we have decided to train this week so watch out whoever we meet in round 2. Hopefully the old girls can get some treatment this week and with a mix of deep heat and anti-inflam’s can hit the pitch again for round 2.

So great being back out on the pitch with all the girls again, although when some of us can’t walk on Monday we may regret it..

An excited group of panther women started the 2021 season together on Saturday. An awesome game filled with balls going missing during the game 😂, training drills in action 👍 and goals scored from parts of the D that are impossible to score from 😆 … so the coach says. Moral of the story, So tell us what is impossible and it will happen.

Special thanks to the special panther spirit from Erica, Tamara and Emily for saving our lungs and legs by doubling up in our game. Looking forward to a great season with these top women 🏑

Guess who’s back, back again, Pen E’s back, Tell your friends! What a wonderful way to end a weekend! There is nothing quite like a Sunday 5pm game to wrap up the weekend. Lucas had us all fired up and ready to take it to the Brumbies. Although we did have questions like, “Quarters… What are they???” and “What?! I still cannot use my feet?!” We had a solid game and followed Lucas’ advice to go round the outside, round the outside – in the forward line it was all about the base… line. Communication was key in the back line with a few sneaky forwards thinking they had it on us – however not only did they not score – they never had a shot – some absolutely solid tackles and clearances were produced.

Early in the 4th quarter we ran, we linked & Anouk got the rebound off the goalies pads to slot the ball in the back of the net.

Thank goodness we are back to playing hockey! Bring on the rest of the season, I cant wait to play again next week – although my quads might need 2 weeks to recover.

Waverley’s Metro B woman’s team played their first match of the season on Sunday afternoon against Doncaster, at the Doncaster Hockey Club.

We dominated the game, having the ball in our forward half for most of the game. Considering it was our first game of the season and first game many of us had played together, our skills, team work and strong defensive pressure from our back line were commendable. Unfortunately, after several near misses, the match ended as a nil all draw.

Best on field was Grace who was busy all game both pressuring the opposition to generate turnovers and carrying the ball forward in attack. Special mention also should be made of the efforts of Ellie, Jayana and Tilly who were also in everything throughout the game. Additionally, Carly Patterson showed plenty of promise playing in her first hockey game!

Well done ladies! Looking forward to the next game!

After 18 months, 3 pre seasons and a covid breach twitter scandal, the boys were very excited to finally be out there playing again.

Featuring 4 debutants and a couple of returning stars, it was Alastair Hackett who took the first quarter by storm with a double within the first 15mins, and almost adding a 3rd before quarter time.

The second and third quarter consisted of countless short corners that unfortunately couldn’t been capitalised, and if it wasn’t for an amazing stroke save by debutant Joaquim Novaes, it would have made for a very tense last quarter.

Boys eventually held on to win 2-0!

Kicking off Saturday in style the PLR men put 4 goals past Yarra to set the tone for how things should pan out for the rest of the day.

The team was full of debutants who all stood up and proved their worth at PLR level. Harry Smith one of our debutants opened his account early scoring our first goal for the year. What a ripper it was!

From here we look forward to a hard week on the track and a 5pm game at Greensborough next weekend.

Not an ideal start to the season for PA who came up against a strong outfit.
Good to debut some promising younger guys.

Hopefully we can build on this and move forward.

And….. we’re back! After 18 months of no HV hockey and a hard fought COVID cup, the ball was finally rolling again. It was good to see that the usual suspects were again filling the coffers of the end of season fine kitty. Nothin’ changed.

Sima ‘diet CC&dry’ definitely could have done with another 4 pre seasons and that showed right at the warm up. Macca ‘Confusius himself’ was happy to explain his new position to anyone who would listen (if only he had researched the correct one…). Great to see some new faces in PE, welcome on board fellas.

KBH clearly was still in COVID mode as their goalie did not turn up until quarter time,which meant we need to make sure that we capitalised. We did, two goals in the first 10 minutes gave us a handy lead. In the second quarter, Bailey ‘sneaky a-f’ managed to steal a poorly executed 16 yard hit and bury it deep in the back of the KBH net. 3-0, piece of cake…. as many-a-team have thought before us. We rested on our laurels a bit during the second half and KBH managed to sneak a goal in the third qtr. We got a little nervous and started playing like it, throwing easy passes over the sideline, missing easy traps and running like Lanky on his way to the pee-filled pool at the holiday-in in Carrum-Downs.

5 minutes before the end KBH managed to score again and the heat was really on. However, we managed to hold on in the end. We clearly have some more work to do if we want to compete for finals this year. As always, after the game the beers, hotdogs and potato cakes flowed freely. Bring on next week.

With a number of debutants starting this week for the Men’s Metro Group, including a number of youngsters aged 13-16, the game started with high intensity from both teams. Unfortunately TEMS popped in a few early goals to go to a 3-0 lead by quarter time (noting they had a CF and CH who a few years ago playing PL as they told us afterwards!).

But after a great quarter time rev up and tactical speech by Dwayno, the Waverley boys bounced back hard with the next goal coming through a superb link up of passes from the full back line through to our forward line. And our defence really dug deep with some courageous tackles … conceding just the 1 goal over the last 3 quarter of the game.

Lots to build on for the season ahead led by the great impact of the youngsters already winning the ball in key moments.